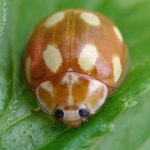 The Arthropods (Arthropoda) are the species-richest phylum in the animal kingdom with more than a million described and many undiscovered species. About 252 million years ago the marine trilobites are already extinct whose existence is occupied by many fossils. Present representatives of arthropods are the hexapods (hexapoda) including the insects (insecta), the chelicerates (chelicerata), in which the arachnids (arachnida) are arranged, the crustaceans (crustacea) and millipedes (myriapoda).
The largest living arthropod belonging to the crustaceans is the Japanese spider crab (Macrocheira kaempferi) with a body diameter of 40 cm and a span of the extremities of nearly 4 m, weighing up to 20 kg. The longest known insect with a body length of 35.7 cm is the female of Chan's megastick (Phobaeticus chani) belonging to the stick insects (Phasmatodea). Very small arthropods with a body length of just one tenth of a millimeter can be found at the mites. The smallest representatives of insects, e.g., chalcid wasps of the family Mymaridae (fairyflies, fairy wasps) are only slightly larger.

In the course of their more than 500 million years traceable history, the arthropods have developed an enormous variety of forms that has led to many variations of their body plan. All arthropods have a segmented body and articulated limbs, an exoskeleton, as well as an “open” circulatory system in which blood and lymph mix into hemolymph.

In contrast to vertebrates, which have an internal skeleton that arthropods have a stabilizing exoskeleton. This outer body shell is called the cuticle. It shapes and stabilizes the body, serves as muscle insertion and provides protection against enemies. The cuticle is deposited from the outermost layer of cells (epidermis) to the outside and consists of sclerotin, a complex of solidified proteins and chitin. This natural, multi-component composite material can be soft and flexible or form a hard and solid shell depending on its composition. On land living arthropods need a protection against water loss and dehydration. This function complies with a thin outer layer of waxy substances, called epicuticle.

Because of the fixed outer shell growth is only possible if the cuticle is periodically stripped off and replaced by a new one. This hormonally controlled process is called molting. The new, still soft skin is already under the old skin and hardens in a short time. The stripped old body shell is called exuvia. The number of molts depends on the specific group of arthropods, but may also be influenced by the environmental conditions.

In case of danger many arthropods are capable of autotomy. They are able to throw off limbs or parts of them. The separation takes place at specially designated "break points". In particular, spiders and harvestmen have in the early stages of development, the ability to renew severed limbs. The regeneration of extremities can take several molts.

Development of insects and spiders

Unlike most insects (silverfish and bristletails excluded) spiders have as larvae the characteristics of the adult animals. The molting to sexually mature animal is referred to in the spiders as adult molt. In particular, longer living female spiders can molt as adult animals. In insects, the individual molts are often associated with a change in form (metamorphosis). One distinguishes between complete metamorphosis (holometabolism) and incomplete metamorphosis (hemimetabolism).

Holometabola (endopterygota) undergo a complete metamorphosis from egg via different larval stages and pupal stage to sexually mature insect (imago). The holometabolous insects include e.g., the butterflies, beetles, bees, wasps, flies and midges. The complete transformation takes place mostly during the pupal stage, which can last for different lengths of time. The essential imaginal organs such as wings, compound eyes, sexual organs are created and functionless internal organs of the larva are dismantled or converted. As an example, there are on the page of the Small Tortoiseshell pictures of the penultimate molt from caterpillar to pupa and last molt to the butterfly.

In incomplete metamorphosis of hemimetabolic insects the pupal stage is missing. The hemimetabolic insects include among others the dragonflies, grasshoppers, crickets, cockroaches, mayflies, cicadas and bugs. The most striking difference between larva and imago are the only after the last molting fully developed wings. An exception are the mayflies. From the last larval skin slips an airworthy, not yet sexually mature subimago which then sheds its skin to mature imago. On the page of the hemimetabolic Bronze Shieldbug (Troilus luridus) can be traced the development from egg through the different larval stages numbered L1 to L5 to adult animal based on images.

The arthropods, often referred to as the true rulers of the earth, colonize almost all known habitats. They live in the water, ashore and have conquered the airspace. Some, e.g. bothfly larvae, fleas and various species of mites have specialized in the "animal" habitat. Very many arthropods, live and develop in the soil, in soil litter, in deadwood, on plants or in growths of plant tissue.